Now that more of the big picture of the game is semi-nailed down, we can re-visit soldiers and their missions with much more clarity. Since they use their commanders’ Role stats, each soldier doesn’t need a lot of additional detail, which is good since it cuts down on tedious bookkeeping. So how can we give each trooper uncomplicated individuality to stir maximally immersive role-playing experience and attachment? In a game where troopers face lethal danger every turn, players may need incentive not to view the grunts as faceless alien fodder.

So what are X-Com troopers made of?

Players use their Commanders’ Roles for any troopers they control.

As previously stated, trooper deaths will be more tragic when players are invested in their characters. So let’s add some individuality to each trooper, both to increase tactical options in team dynamics, and to make each loss more poignant.

Troopers gain individual value through their unique combination of Talents, Distinctions, and Rank. Below is a draft of a mini-character sheet for troopers with all the information they need. 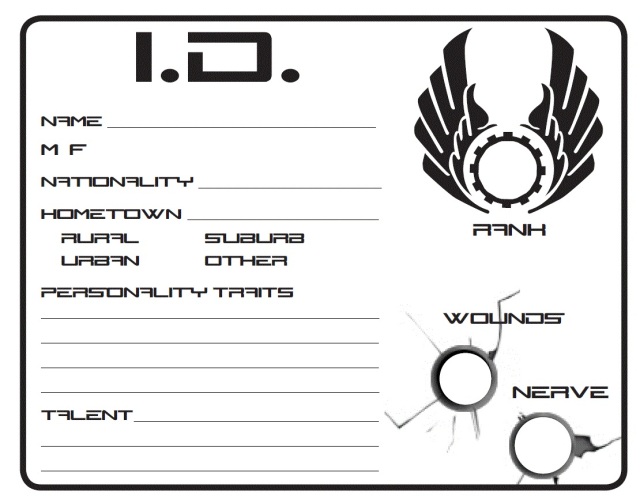 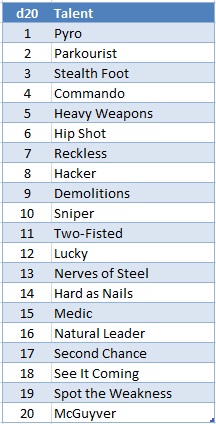 Roll for a random Talent for each new Rookie.

Half of these Talents (1-9) grant a free increase to the Time die in certain situations. Some do more unique things, such as allowing oneself or others to ignore a certain number of Wound or Nerve Dice.

Fill in brief details about each soldier, giving them individuality. Each of the following details (besides Name) are treated as Distinctions.

All troopers have a rank. Each new recruit starts as a Rookie and advanced through experience, heroism, and surviving missions:

A trooper’s Rank die can be added to one of their rolls, once per Round; Either Offensive, Defensive, Maneuver rolls, or Rank can stand in for a trooper’s Soldier or Ace rating to stave off Wounds or Panic at the beginning of a round. Also, Rank determines the number of TUs trooper’s refresh each Round:

Whenever Trooper Joe survives a mission, he rolls Experience d6 vs Current Rank, and if the Experience d6 is higher, he gets promoted increasing his Rank die one step. If he would increase his Rank die beyond d12, he chooses an additional Talent.

Honors: After each mission, players and GM vote for the top two characters who contributed the most to the mission (whether with a pivotal shot, a risky move of self-sacrifice, a creative plan, a stirring example of leadership, or an emotional narration of a loss of friendship or one’s own death, etc.). The top contributing characters roll a d10, or a d8 for the Experience Die instead of the usual d6 respectively.

If a dead character is voted for one of these honors, the dead character’s player can increase the Experience Die of another of his/her characters. An onlooking ally was inspired by the dead trooper’s example.

Example: Trooper Joe (a Squaddie d6) normally rolls a d6 when he survives a mission. In this particular mission, he was voted top contributor for a daring act of sacrifice running into the open to provide cover fire so a wounded ally could crawl to safety. He rolls 1d10 vs. 1d6 (Current Rank) with results of 5, 3 respectively. Since his Experience Die result was higher than that of his Rank Die, he gets promoted to Sergeant d8.

Questions, comments, ideas? Next I’ll tackle trooper injury and morale with Wound and Nerve Dice. These allow for some tricks hinted at on the Trooper Talents Table.

Adam is a husband, an explorer of the inexhaustible, and a hunter for unexpected synergies and collaborative potentials. His explorations into RPGs began with DMing D&D, though lately he enjoys mining the potentials of diverse systems, especially Cortex Plus.
View all posts by Adam →
This entry was posted in CortexPlus, Gaming, Mechanics, X-Com RPG and tagged Cortex Plus, Role-playing game, UFO: Enemy Unknown, X-Com RPG. Bookmark the permalink.